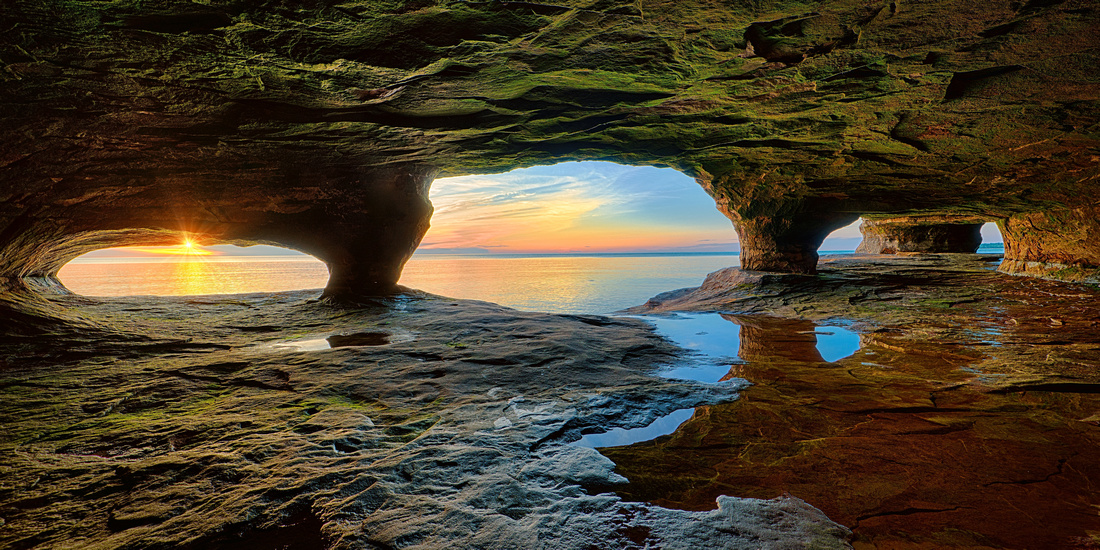 The photo below was taken in the area known as "the-coves". It's gorgeous there, the water in Lake Superior is so clear. These beautiful little coves that have been carved by the lake look like places you might see in the Caribbean; we call it "Michigan's Caribbean". 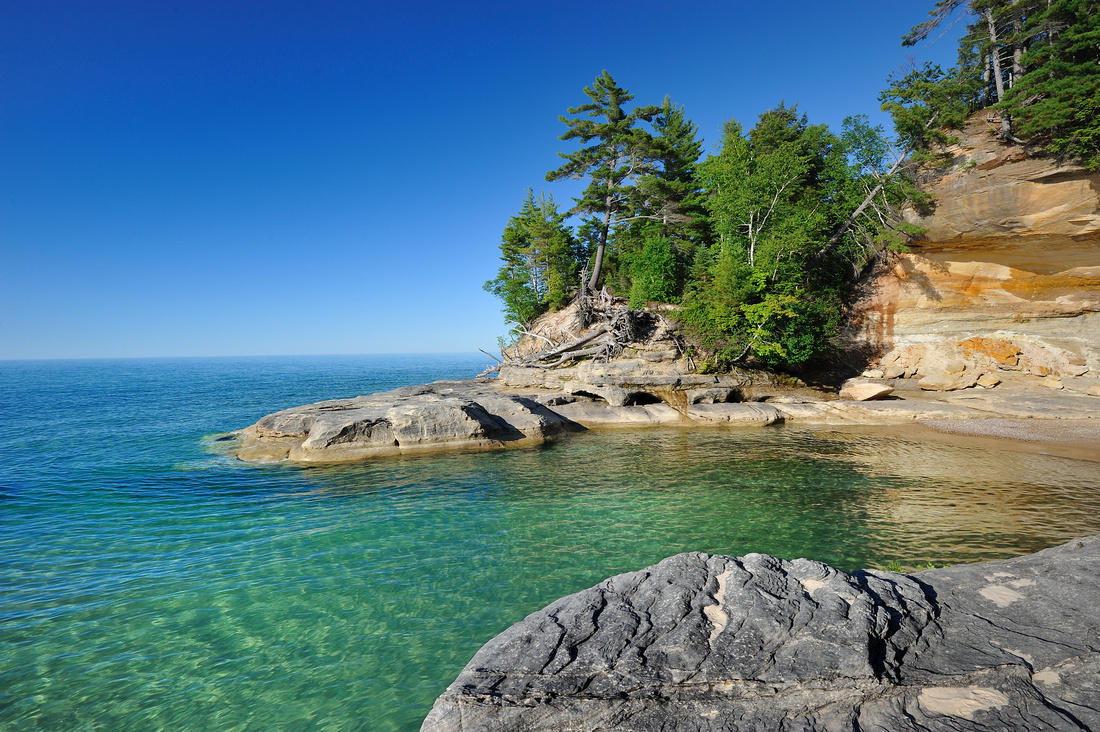 It's amazing what the power of Lake Superior can do to the shoreline. This cave found near AuTrain Point has windows & pillars carved into to it with a beautiful view looking north. At sunset the light fills the cave which gives it a stunning glow.. 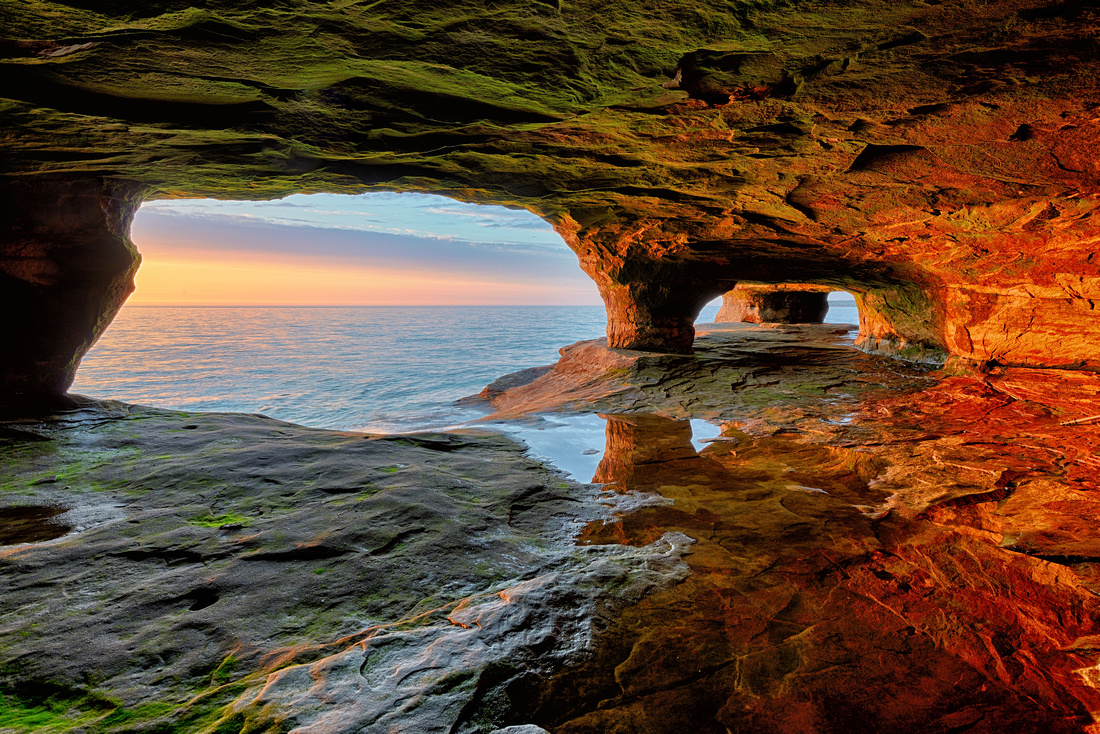 The following ice cave photos were taken along the historic and beautiful Grand Island shoreline. When we get a very cold Winter here in Michigan, Lake Superior can freeze Munising Bay over making it possible to cross the ice to the island. Always check with the locals first for information regarding the ice conditions, and where to cross. It's an amazing thing to see, ice curtains over 30 feet tall and hidden little caves to find and explore. Ice cleats, snowshoes, or ice crampons are a must; along with a warm pair of boots.

In this panoramic, I was able to get a shot of a person standing inside of this beautiful cavern. Sand Point on the mainland of Munising, is seen in the distance. 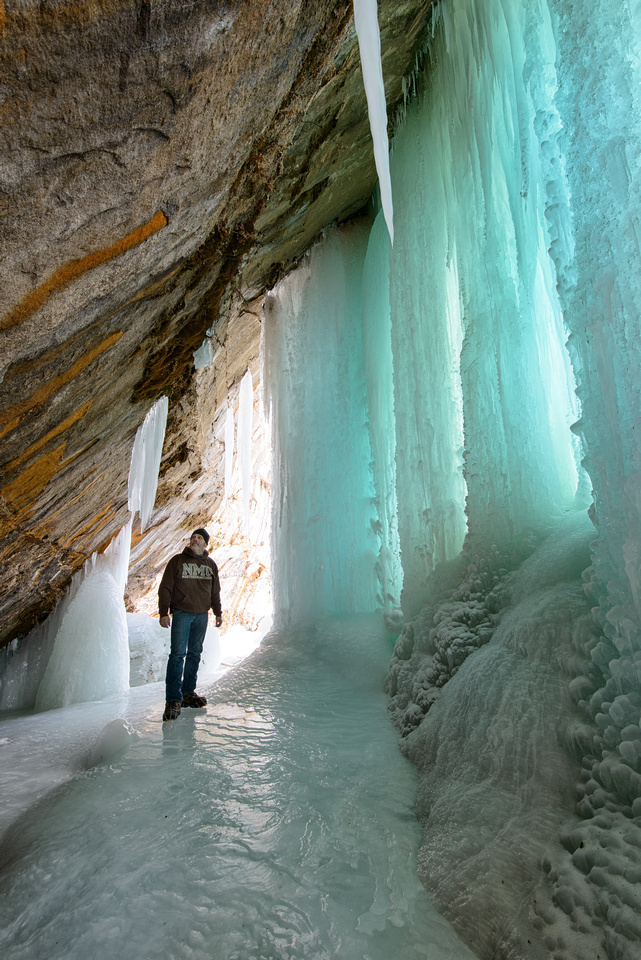 This little cave I found "blew my mind". The frozen column of blue-green ice appeared as though the icy waters of Lake Superior had been pouring down from above and it had froze that way.. Simple stunning, and pretty scary being in there too! 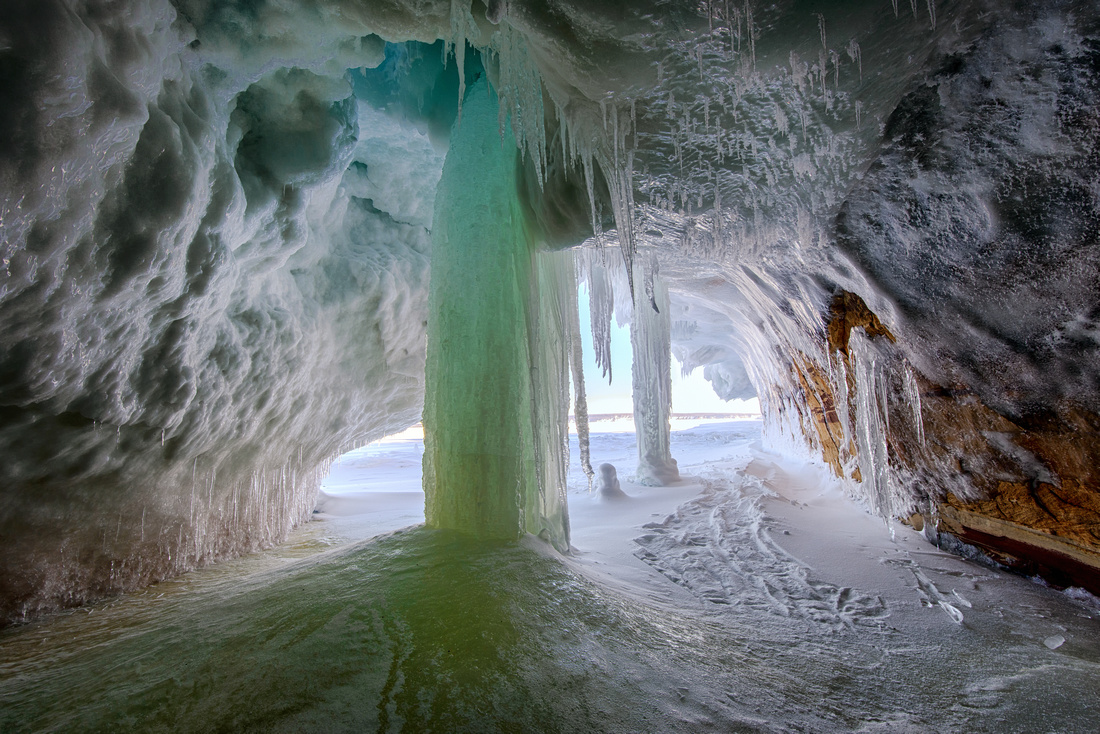 "Ice Cave Waterfall"This ice cave I found along Lake Superior ranks very high on my "fascinating discoveries" list. It appeared as though at one point Lake Superior's water had been washing back down through the hole in the cave ceiling, creating this beautiful blue feature.

Back to the warmer months. This is another image captured near AuTrain Point West of Munising. If you like to kayak, this is the place for you. When my wife and I were taking these photos we saw smoke rising from the forest along the shore and then the sounds of Native American hand-drums and song. It was a very memorable experience. 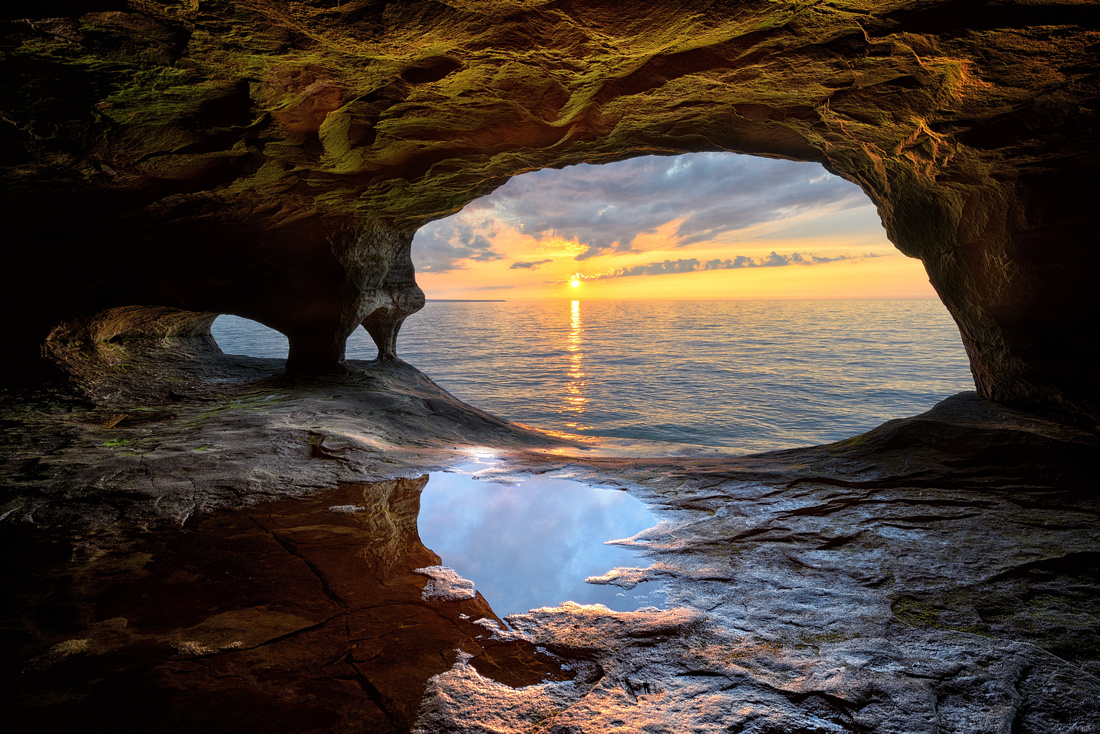 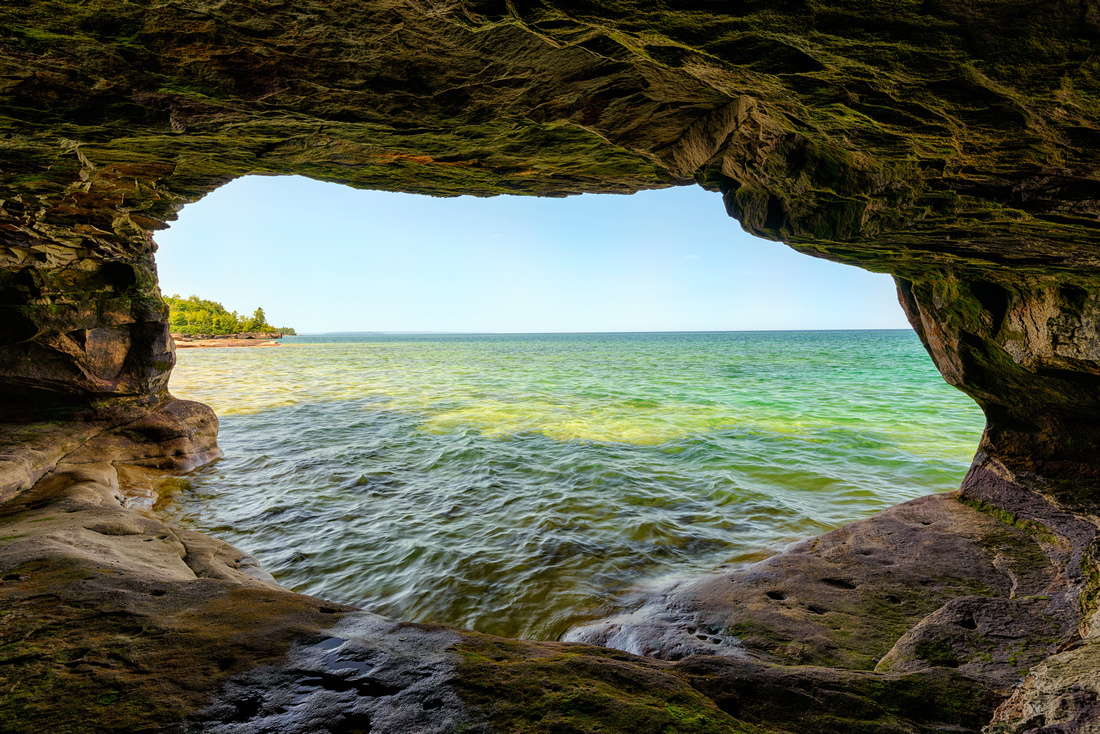 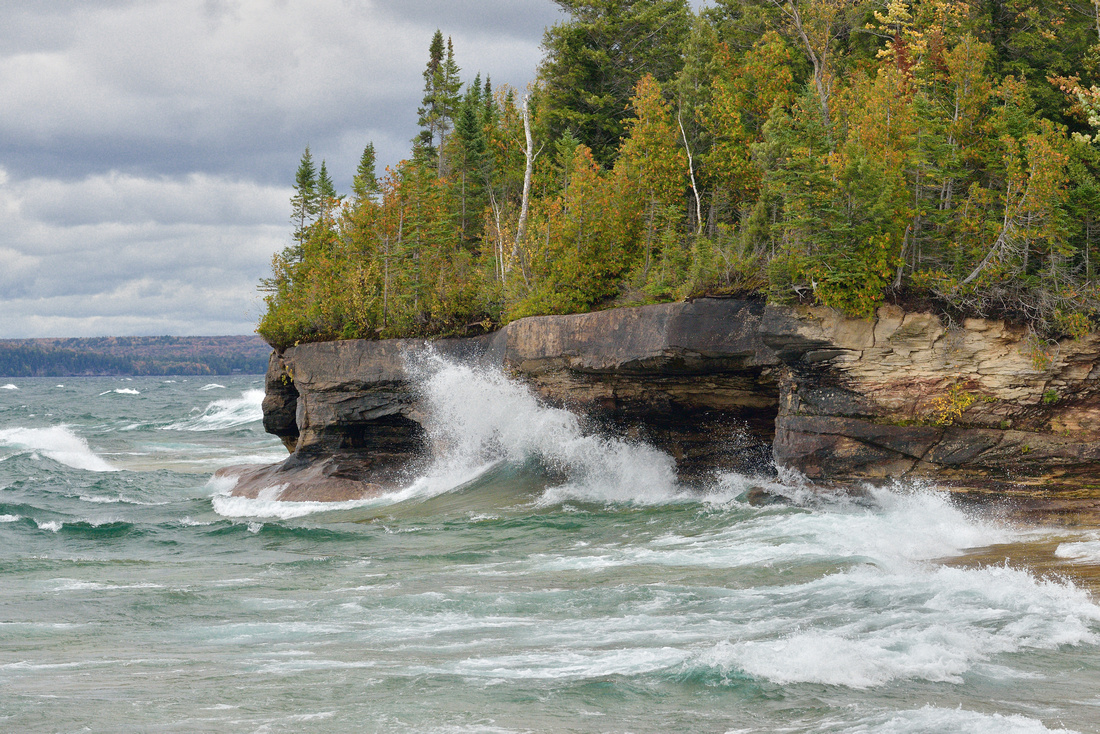 One of the most visited and easily accessed coves is Miners Castle in the Pictured Rocks National Lakeshore. In this shot, the sun is seen going down over Grand Island in the distance. 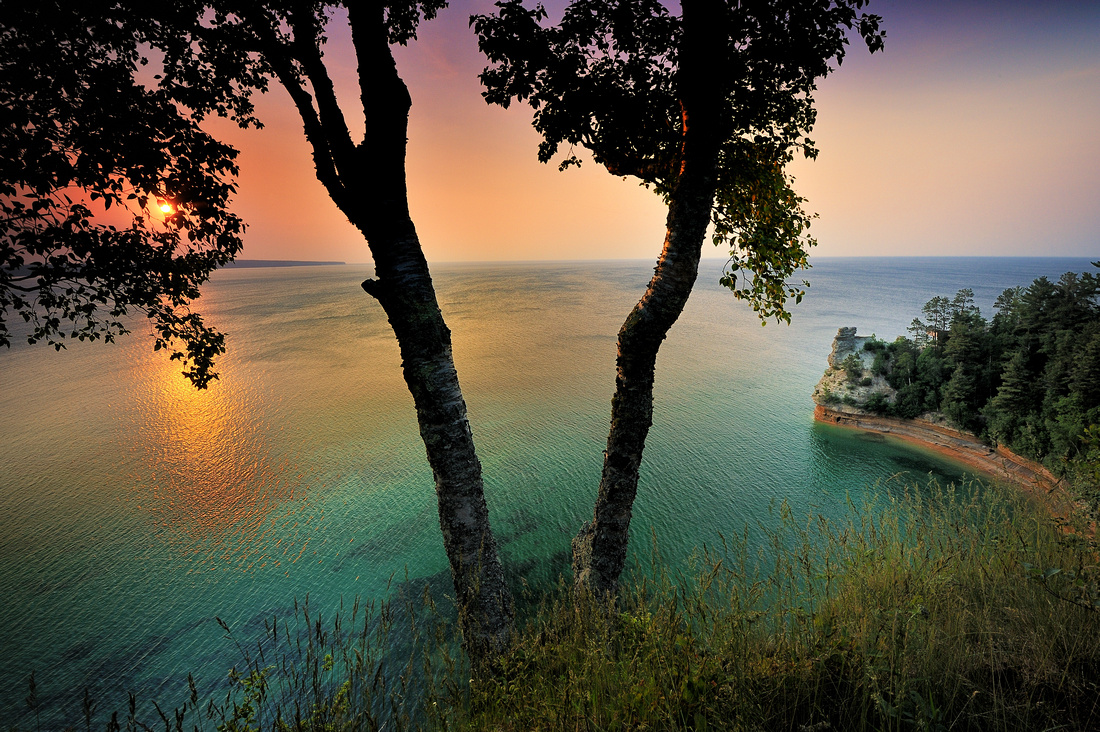 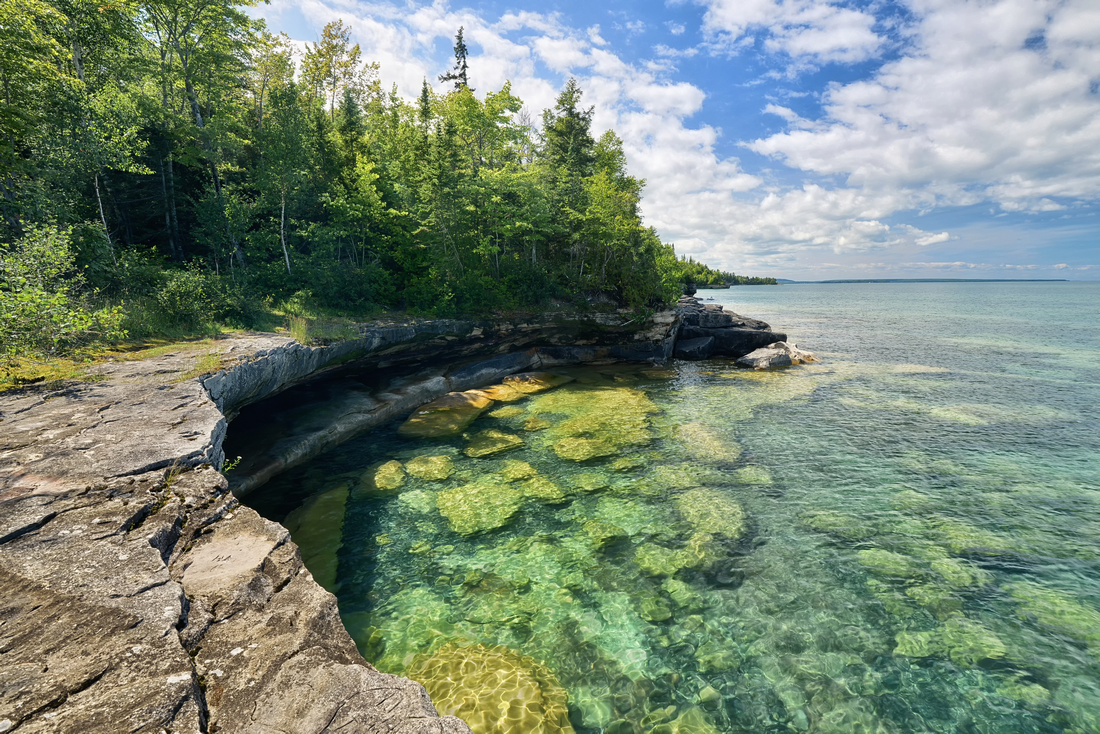 Thanks for taking the time to read my blog. You can see my entire Lake Superior caves & coves gallery here. Check out my Pictured Rocks gallery if are interested in seeing much more of my work taken along Lake Superio.  See my home page for links to all of my Michigan galleries, or if you happen to be interested in buying a print, canvas, or if your interested in licensing an image.

Thank you very much! 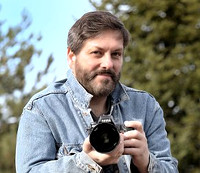 John McCormick is a lifelong Michigan resident and has been interested in Michigan Nature Photography for over 30 years. Michigan is a beautiful place to live and photographing that beauty is his absolute passion. To follow his recent work be sure to "like" his facebook page.

Robert Vincent Lower(non-registered)
As a teen back 50 years I take a trip.to.the caves but I found cave pics are they still they are now close off to everyone
Cheryl(non-registered)
Beutiful photos. Do you give photo tours of these areas?
Andrew Schwab(non-registered)
I am planning a road trip next summer, and we will be going through Michigan. Is there an address for “The Coves” on Lake Superior. Text me at (484) 653-8309 or email at [email protected]
Debbie(non-registered)
Hello, my family and I have never been to the UP and are planning on visiting this summer! I ran across your picture of "The Coves" of Pictured Rocks Lakeshore - could you please tell me whereabouts that is? We'd love to see the carved rock under the water like in your pic! Thank you!
Gwendolynn Gonwa(non-registered)
How do you get there in summer?
No comments posted.
Loading... 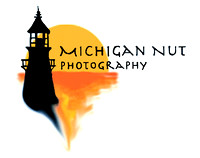